With the growing and changing demands of global trade, many ports across the world are increasingly faced with more difficult challenges. These include infrastructure limitations (and the associated need for optimization), limited handling capacity, and high OPEX, as well as the challenge of complying with more stringent regulations, man-power issues, and aspects of sustainability.

It is commonly known that the adoption of ICT technologies in the port sector addresses many of these challenges. However, the question arises as to how and when the sector can fully harness emerging ICT technologies to provide cost and time-effective management and monitoring solutions, customized to meet the specific business requirements of ports while catering for the maritime environment and fully complying with evolving regulations. The question has been partially addressed by some ports that have recently taken steps toward the digital transformation of their processes, based essentially on IoT, cloud computing, and renewable energy.

This event aims to highlight the experiences of some of these smart ports and the benefits achieved of such digitalization steps. Going beyond what has been achieved, the event brings speakers from different contexts and locations in the world to discuss the Smart Port view on the evolution of paradigms and roadmaps toward new approaches based on emerging technological trends such as 5G and Beyond, Big Data, Artificial Intelligence, and Digital Twins. The program will highlight the different approaches taken in very different ports and very different stakeholders, and allow for a presentation of a very diverse set of views associated to the future of Smart Ports.

The agenda of the webinar is: 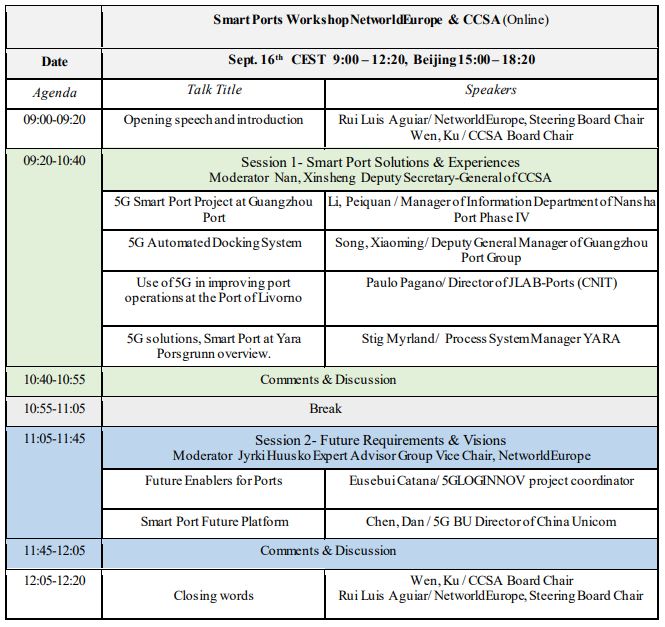 Rui L Aguiar, Chair of the Steering Board of the NetworldEurope European Technology Platform, has been involved in research and strategic research management since 1988, having been involved (in multiple positions) in all European-funded framework programs.   He was involved in the development of the NetworldEurope initiative, and the launch of the 5G-Infrastructure Association PPP, and has led the association before. He has been an IEEE Distinguished Lecturer on 5G in the last years, and has several hundred papers on communication networks and services. He is also the co-chair of the Networks and Multimedia area at Instituto de Telecomunicações, a Portuguese state-associated laboratory, and a Full Professor at Universidade de Aveiro.

China Communications Standards Association (CCSA) is an industry, national, open, and non-profit social organization composed of companies and institutes engaged in ICT standardization activities in China, and is committed to contributing to the development of ICT industry in China. In accordance with the principles of openness, fairness, impartiality and consensus, CCSA establishes a work system that is enterprise-basic, market-oriented, combining production, learning, and research, and organizes information and communication standardization activities.

Xinsheng NAN, Deputy Secretary-General of China Communications Standardization Association (CCSA), Professor of Engineering, He has got Doctor’s degree in Business Administration and is entitled to the special government allowance of The State Council. 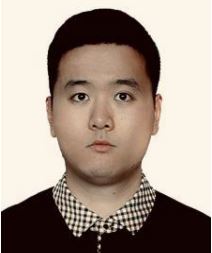 Paolo Pagano is Area Leader at the National Inter-University Consortium for Telecom-munications (CNIT) in Pisa, Italy. From October 2015 he is also the Director of the CNIT laboratory on advanced sensing and networking in sea ports in Livorno. His research ac-tivities have a specific focus on IoT and Mobile Networks. He is responsible of public and private research grants in the domain of Intelligent Transport Systems and Smart Plants. He is participating (on behalf of CNIT) to the ETSI standardization committees for Intel-ligent Transportation and Maritime Digitalization. From September 2018 he is member of the Working Group “Smart Roads”, Technical Committee on Autonomous Driving at the World Road Association. From June 2021 he is the vice-chairman of the ETSI ISG CDM (European Common Information Sharing Environment Service and Data Model).

Stig Myrland, Process System Manager at Yara Porsgrunn are the owner of the Smart Port use case in the EU project 5G solutions. Stig Myrland has two master degrees, one in Process Automation and one in Management. Stig have more than 30 years of experience in the field of production IT, process control and automation of production processes. In his presentation Stig will focus on the use of 5G in the smart port at the facility in Porsgrunn. The focus will be from an Industrial end user perspective.

Jyrki Huusko, vice-chair of NetworldEurope’s Expert Advisory Group has been involved in telecommunication and network research and research management over 20 years. He is research team leader at VTT Ltd, leading the 5G and Beyond Networks research team focusing especially on mission-critical networks and intelligent network resource management for future wireless and wired networks. He has been with VTT since 1998 in telecommunication research having several different positions in research and research management. Jyrki Huusko has contributed on several EU and national research roadmap and technology foresight whitepaper working groups on mobile network technologies, IoT and media & content distribution, as well as on research program definitions.He is also involved in 5G IA (6G IA) and its working group such as Trials WG where he is acting as a stream champion for smart city related trials.

Eusebiu Catana is the coordinator of the 5G LOGINNOV project and he is senior Manager in the field of ITS transport & logistics, ALICE vice-chairman and member of the DTLF steering committee. He Holds a PHD in Vehicle Telematics, Master Degrees in Electronics Engineering and in Operations Research from University of Leuven and as well as Project Management Professional (PMP)® and CISA certifications. He has started his career at ACUNIA in Belgium as software developer for the On-Star software project for General Motors in the field of vehicle telematics. He has previously worked as a Technical Consultant in R&D for about 20 years for top technology companies in Europe and USA (e.g. projects: On-Star, Vehicle Telematics, TRIDENT, OTAP, CO-GISTICS, AEOLIX, COREALIS, CONCORDA, AUTOPILOT, SHOW, BOOSTLOG etc.). In 2002 in Munich he was awarded with the “best award for ITS project development platform for transport” from the IT industry. He is leading the team1-conceptual interoperability of Digital Transport and Logistics forum (DG MOVE), vice-chair in ALICE for Physical Internet for logistics, member in C2C and CAD working groups. Within ERTICO, he was project coordinator for CO-GISTICS(35 partners, 7,369MEuro), AEOLIX(41 partners, 17MEuro) and CONCORDA(27 partners, 20MEuro) projects and at the moment he is project coordinator for FENIX (46 partners, 60.6MEuro) and 5G-LOGINNOV(15 partners, 8MEuro) projects. He is expert in big data platform,AI and collaborative services.

Dan Chen, Ph.D graduated from Beijing University of Posts and Telecommunications / University of British Columbia (UBC). She is currently the 5G BU director of China Unicom’s government and enterprise customer business group. She is responsible for 5G private network, MEC edge computing, network slicing end-to-end product design, 5G 2B strategy research, ecosystem construction, and commercialization implementation. She has published more than 20 SCI/EI journals and licensed more than 20 patents in IEEE JSAC and TVT. She won the National First Prize of the Blooming Cup and the Gold Award of the Benchmark Competition from Ministry of Industry and Information Technology (MIIT), also first prize of “Science and Technology Innovation Award” and first prize of “5G Technology Research and Standardization” from China Unicom.

We're not around right now. But you can send us an email and we'll get back to you, asap.